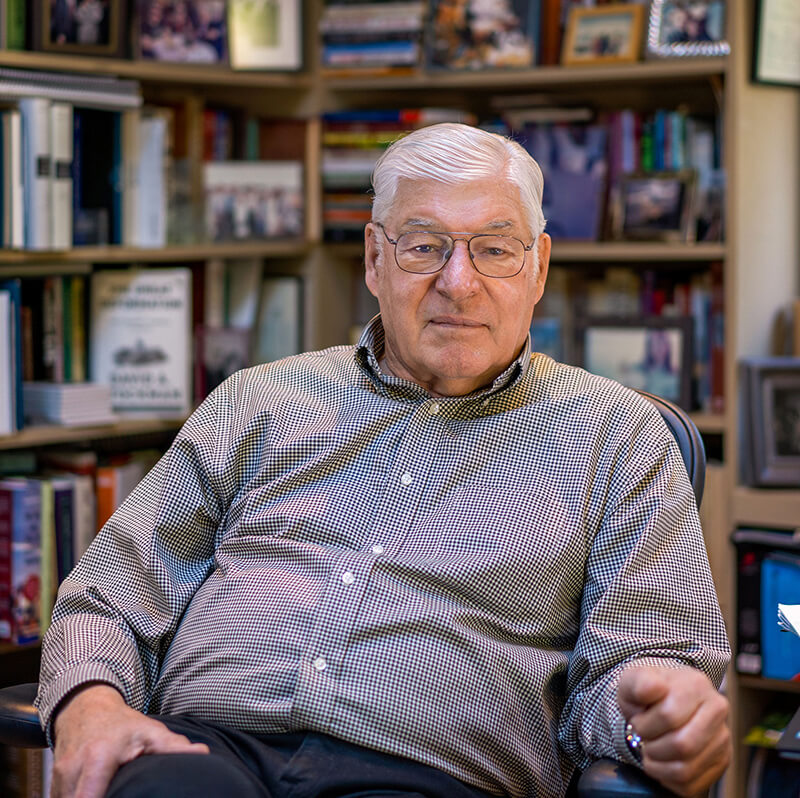 Q:  This is the Stone Edge Farm Estate Vineyards & Winery MicroGrid. What role does the MicroGrid play in producing fine wines?

Mac: The MicroGrid is a sustainable winemaking tool. The sun powers our vineyard irrigation pumps, the biggest electrical loads we have, with no carbon footprint. We employ earth-saving technology to make world-class wine.

Q: Where and when did your concern for the environment begin?

Mac:  I was born during the Depression and began working summers on my uncle’s farm near the end of World War II. That era was an extended period of economic hardship and rationing, of “waste not, want not.” We had no garbage on the farm. We didn’t waste anything.

I attended Northwestern University, graduated, and served in the Navy for two years as chief engineer on a destroyer, the U.S.S. Wiltsie (DD-716). I was affected by seeing garbage in the ocean even then, including some dumped from our ship.

John Denver and his Windstar Foundation in Snowmass stimulated my concern for the environment in the late 1970s. The Rocky Mountain Institute, with which I’m involved, began there in 1982 and continues to focus on sustainability and energy efficiency.

Finally, serving on the Scripps Institution advisory board since 2002 has better informed me about the big picture regarding oceanic, atmospheric, and geographical degradation.

Q: In a nutshell, what has gone so wrong?

Mac:  We humans have not paid for our waste. We need to remove 100 parts per million -- equivalent to a trillion tons -- of CO2 from the atmosphere. That mass is equal to the carbon emissions of 500 billion cars. Keep in mind that only 1.2 billion cars currently exist on our planet.

The problem with fossil fuels is a familiar one, an unforeseen consequence that was assumed rather than measured. Humans operate on unverifiable assumptions that we aren’t even aware of. The way to rid ourselves of such assumptions is with data.

Q: What should we have paid for our waste?

Mac:  According to the U.S. Government, the social cost of carbon is $50 per ton -- three times what people pay. The University of Chicago puts the cost at $100, or six times more, and when Michael Greenstone quantifies the health costs of pollution, the cost rises as high as $1,000.

We burn four cubic miles of carbon dioxide annually, and it remains in the atmosphere for centuries. A ton of coal produces 2.8 tons of CO2. If the actual social cost of carbon is $1,000 per ton, then that’s $2,800 per ton of coal. Right now 30 percent of U.S. energy still comes from coal. The cost of coal waste is ten times what the consumer pays for it when buying electricity.

Our government’s subsidy of the fossil fuel industry equals four percent of our gross domestic product (GDP). We need to get energy prices right. To do that, you have to go with the data.

Q: But where would you begin to change the utility grid system, and why?

Mac: Every building could, and should, be its own microgrid. The current electrical power industry is just an artifact of history.

The U.S. Public Utilities Act of 1935 turned production of electricity over to the states. One central decision created local monopolies and imposed a single predominant energy source, fossil fuels, on the entire nation. That technology has been set in concrete for 85 years. And regulation has made it non-adaptive.

Q:  What will it take to replace the entire energy system? Is it economically possible?

Mac:  Once the problems of microgrids like ours are solved -- and that process is well underway -- they will be riskless investments. The next generation of microgrids will be modular and self-contained with a return on investment of 4 to 5%.

But besides economic considerations, we need innovative, knowledgeable, motivated people. And the most crucial group is young people. We have had 68  interns from two dozen universities working here for periods of from three to six months, and sometimes beyond. We were extremely fortunate that Jorge Elizondo was our first intern, and of course, he’s still working with us as chief scientist at Heila Technologies.

The MicroGrid provides a rich learning environment wherein these students have been inspired to actually get things done. Interns are terrific because they ask a lot of questions and like to get their hands dirty.

Q: Why did you insist on proceeding “without fear of failure” to develop the MicroGrid?

Mac: Failure is the crucible of success. You must fail to learn. And individual people have to quit talking and take responsibility. Government won’t resolve the problem. It is the problem.

We didn’t know what we were doing when we started the MicroGrid. But at some point, you’re better off to do something rather than overthink it. Start, and see what you find out. Five years later, we crossed a critical juncture. Now we know how. Begin with what you don’t know; other unknowns will come up.

Q: You once described yourself as an anarchist. What did you mean?

Mac: Well, I didn’t mean that I run around throwing bombs. I would say that if I had a major problem to solve – climate change, for example – I would rely on a chaotic group of one hundred entrepreneurs rather than on one bureaucrat telling 99 other people what to do.

Entrepreneurial decentralized decision-making is powerful. Like most things do, it starts small.

Q:  Speaking of decentralized, powerful topics, what were the biggest MicroGrid discoveries?

Mac: Microgrids aren’t new. Both Edison and Westinghouse started electric companies 130 years ago in Manhattan with their own microgrids.

We set out to drive our carbon footprint far below zero, and our development was serendipity. Our biggest discoveries were the importance of hydrogen gas and Jorge Elizondo’s Heila IQ control system.

Like most places, we have ample sunshine for solar energy generation in the summer, but not in winter. It was not obvious how we would bridge that gap.

Simply put, hydrogen gas has an energy density quite a bit greater than that of methane (natural gas). And instead of CO2 from carbon-based oxidation, you get a byproduct of pure water. Things began to fall together. The traditional form of hydrogen production, steam reforming, requires fossil fuel. But, not anymore.

With an electrolyzer, we had a load that would use our surplus solar power in summer months to split rainwater and produce hydrogen. Hydrogen stores indefinitely without degradation, and it’s also available instantly on demand to generate electricity in fuel cells. We bridged the gap with clean energy available year-round.

Jorge singlehandedly solved our control problems, enabling us to deploy resources designed and built by different companies and not for automated networks. He orchestrated them all in real time, working together to determine the most economical power source at a given point in time.

His controller has no rules. It uses a variation of blockchain, which enables very secure transactions to occur very quickly, to price out every resource and determine the least costly. With 20 highly distributed, independently behaving assets, the transactions are 20 factorial (20!) -- the product of 20 times every integer below it.

A team from Northwestern University is now studying the marginal economics of the MicroGrid.

Q: Prototypes are usually expensive. What are the basic economics of the MicroGrid?

Mac:  So far, there are no scalable economies in microgrids. The capital requirement goes up in relation to area. We did make a substantial capital investment. But after that, the marginal cost of electricity is zero. Your energy source is clean and free -- photons from the sun.

The growth of our MicroGrid was organic, built over five years with one-by-one additions, which really is easier and reduces upfront costs. Jorge’s work is making microgrids more modular, moving toward plug-and-play.

Q: So, what is the future for microgrids, going big or small?

Mac: Both. Every new skyscraper can and should be its own microgrid. The same is really true of every building, as I mentioned.

Jorge and I are designing a conceptual model of a 2,000-square-foot, single-family dwelling that is a microgrid. Actually, most of the energy will be consumed by the two cars in the garage, whether battery- or hydrogen-fuel-cell-powered electric. The house would consume 2.3 tons of hydrogen per year; the cars, 5.3 tons, assuming 40 miles per day. Electricity would replace natural gas.

The house would have solar arrays on the roof, a small electrolyzer, storage and backup batteries, hydrogen storage, fuel cells, and a small fueling station. A cistern beneath the driveway will hold collected rainwater. It would be totally self-sufficient, and we would build it from scratch to avoid retrofit problems.